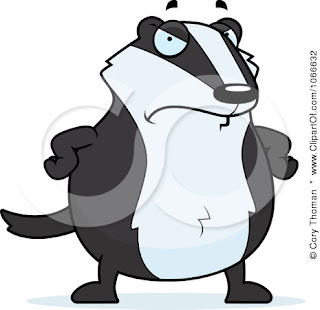 Last night I met Brockwald as I was wandering through the nearby woods; he was emerging out of his sett as the evening sun was setting. After our preliminary greetings, I asked him what he and his colleagues were up to these days - although to be perfectly candid, I really wasn't expecting anything by way of a stimulating answer. So you can imagine my astonishment when he told me in a hushed conspiratorial tone that he and his fellow creatures had recently attended the Northumbrian Badger Synod, where representatives from all the major Northumbrian setts met to discuss various matters of mutual concern and interest. It would appear that the delegates at this Conference had made a unilateral decision to carry out a cull on human politicos.
At this piece of information my ears pricked up, and I scarcely could contain my surprise. After mentally processing this declaration, I managed to summon sufficient composure to ask him what was the reason for this momentous and drastic course of action. He told me that human politicos are the pestilential carriers of all manner of noxious plagues, and the badger communities were becoming more concerned - yea, alarmed - about the threat to their health as a species. I asked him what these deleterious diseases were, and he told me that the main infection was a condition which left them seriously ill and smelling of bovine excrement.
I wished him and his peers well in their collective endeavour, although I don't quite know how they intend to carry out their cull; I didn't have the heart to ask. I suppose they've got it all worked out..
Posted by Caedmon's Cat at 13:51