Strike Me Pink, Bite Me Red

Well, the much-anticipated day has finally arrived. I've been so excited about it that I've been sleeping a lot better than usual. After a wonderful fish breakfast first thing this morning, I wandered from Caedmon's hovel to survey what was happening here in Streonaeshalch, and to gauge the mood of the people. Since I'm only a cat, I can make casual appearances, and no one gives my presence a moment's thought - if they even notice me at all.
My port of call was the local school - normally a hive of frenzied activity and noise. When I arrived there, it was closed as if the day were a Sunday. For a moment I wondered if I'd turned up far too early, since I have a different sense of time from human beings. But I didn't have to wait long before I noticed some bedraggled people arriving at the school gate wielding crudely crafted placards. They looked decidedly hung over, and their hair was dirty and unkempt. They were accompanied by myriads of flies. They didn't look at all like pedagogues; they more resembled the occupants of the hedgerows.
Soon, more people showed up with banners and bags of magic mushrooms, which I suspect were brought along to provide them with inspiration for the daunting task that lay ahead of them. After half an hour or so, there was a substantial crowd of educators with their mushrooms and placards. They started to drone, bawl, yell incoherently and jeer. I looked around to see the object of their vocal outburst, but I perceived no one. The mushrooms were evidently working.
In view of the fact that the school only has ten pedagogues on its staff at the most, I was intrigued by the high numbers of people protesting outside the gates, so out of curiosity, I edged a little nearer to the frenzied multitude. It didn't take me long to discern that the greatest majority of the happy throng weren't teachers at all. Their banners were carrying the insignia of the Redistributionist Workers Faction, which I happen to know is a professional political body consisting of magic mushroom addicts, no-hopers, wasters, political fanatics, ne'er-do-wells, luvvies, drunks, homeopaths and various other off-beat specimens of humanity. They all have one common denominator: despite the carefully-crafted name of their club, they have neither experience nor even a concept of industry or labour, since their revenue is provided from Northumbrian benefit groats. One of them staggered towards me with a malevolent gleam in his eye; I read the warning signs, and as my reflexes kicked in, I hastily sunk my teeth into his outstretched hand. I was pleased with the resulting cuts from my needle-sharp gnashers and his howl of protest, but decided I ought to take evasive action and climb a tree to avoid retribution. 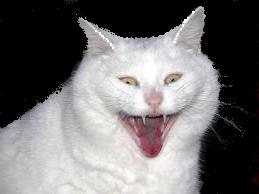 Some passers-by - men and women on their way to their market stalls, fields and workshops - growled and sneered at them as they walked by. They too seem to understand that this Strike is a cause celebre for those who regard a life of Riley at public expense as a Divine Right while ordinary mortals suffer the deprivations consequent to over-taxation.
I wonder what will happen when the supply of magic mushrooms runs out? It would be tempting to assume that most of them would wake up from the illusion they've fondly carried around with them. But I suspect that some of them are so ingrained with the collective Redistributionist mentality that an alternative would be too horrible for them to contemplate. I only hope the blood from that protester's hand wasn't contaminated with fly agaric toxins. All the same, I can understand why Leo gets enthusiastic about his fantasy lunches...
Posted by Caedmon's Cat at 14:13