The Secret Of Political Oratory

They say that you learn something new every day. Most of my own days seem to contradict this well-worn adage, but nevertheless I've just discovered something remarkable which serves to explain so much about politicos in the lovely country of Northumbria.

It happened entirely by chance; during one of my customary patrols of my patch (and occasional forays into the territory of other cats), I happened to be sauntering past Clegge's house. Until recently, he and his Iberian spouse - like most of the political classes - were enjoying the mandatory 'holiday' in some far-flung exotic paradise. In fact, I'm pretty sure that he was absent when I happened past his domain. But I digress. What drew my attention was a strange noise coming from a nearby window.

Now, curiosity is one of those attributes I'm simply unable to suppress, so I simply had to leap up onto the window ledge to investigate the source of the noise. I was surprised to see a cage, carefully suspended from the rafters of the beams in the house. The occupant was a creature I'd never seen before. It had the semblance of a large bird, substantially bigger than a rook. Its plumage was predominantly a bright shade of red with other colours in its wings, and its beak was quite unlike anything I'd seen before; it was large, powerful and curved, ending in a vicious-looking hook. What surprised me further was the sounds it was uttering; it was a medley of loud and ear-piercing shrieks and squawks, punctuated by - and this was the biggest surprise of all - human speech! 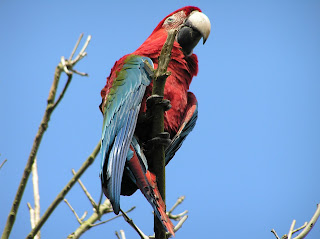 Among the seemingly random sounds it produced, I heard the words "Lessons must be learned," "We will do everything in our power," and "We are seeing the first signs of recovery. We have seen an increase to fifteen percent in growth last month.." I stared, fascinated by this apparition that greeted my eyes and ears. I wasn't tempted by the prospect of a quick dinner, though; the plumage and the beak were sufficient warning that this would in all likelihood lead to an unpleasant outcome.
Later on, I called to see Lareow - the Mouser-In-Chief in Caedmeron's residence. He was enjoying some time out in his master's absence, strolling around, the Emperor of all he surveyed. I mentioned the strange birdlike creature I saw earlier in Clegge's place. I thought that Lareow would have been surprised at what I went on to relate to him, but he wasn't at all impressed. The then went on to tell me that Caedmeron has one as well. So do Edweird the Milliner and Edweird the Spheres. In fact, he said, all the politicos in the Witangemot have them.
I thought about his for some time after I'd seen Lareow, and it suddenly dawned on me - this is how the politicians learned their craft of oratory. They used these birds to instruct them! It all made perfect sense. Now I understand where all the rubbish they spout comes from. These birds have a sinister influence..
Posted by Caedmon's Cat at 13:58